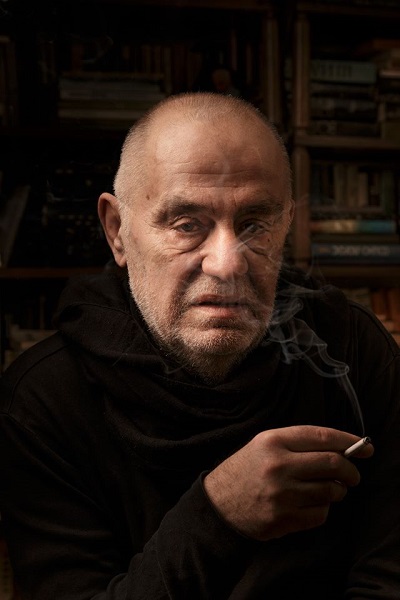 Between me and the other there is only the discourse and the death.

Signifiers as thwarted impulses (of the death drive) - why not say the same for pathogens, they are death in the form of human life (“Politics is therefore death that lives a human life,” à la Achille Mbembe).

We have always been the infected uninfected, the abandoned-symbiotians. In its origin democracy is an autoimmune disease, albeit within the realm of the nihilism of sign and the number.

Thwarted citing, love is citational, and death too. Panics and pandemics - citational ones, thwarted discourse and thwarted death.

With signifiers one seeks the signifieds, with viruses - the patient zero. But here there is only parting ways à la Borges, stopped as they are in the access fetish. The access as non-access.

At the very boundaries of thought and language there is an inherent structural form of contradiction, an in-closure. The closure of the boundaries of any system is thinkable only as its pаradoxical in-closure.

Are we talking about fusional bio-ontologies?

Literalism vs. deliteralization of discourses.

Inhuman Sphynxism of the human, reductive literalism of (somatically ­rooted) drive vs. defense, “anatomy is destiny.”

This is the fixism in the missed encounter with the unlimited Real of the ontological, of the sexual relation, of the trauma, miniscule steps in formalizing the Real, a passion for the virusless exo-world.

The limit of experience as the limit of the limit, chiasms, oxymorons à la Orwell or endless Kantian judgements. Illness is health. Panic is the best order. The virus is the best disinfectant.

The indefinite animal is in an indefinite universe with no cosmological constant, a world of the not-all, or worse, an anti-world without anti-philosophers. And even worse than that, a non-world with non-decisional non-ontologies. Exo-non-ontologies of the Real, the exo-mathematical heaven of Hilbert avec Laruelle.

Animals are transformed into linguistic flexions, into temporal reflexions - is this our ontological vaccination? The intervalled animals of the intervalled pseudo-epochality. And the un-intervalled cosmic extinction as pole position, an aposteriori apriori in relation to which the Terminator-like design of spacing and difference fades away.

Enjoy the ontological gourmet, plateau, palimpsest, along with authors uncited as if cited, with the inhuman signifiers and the stellar innards of astral intestines (the ancient knew this, and so did Byron in Song X of the Don Juan), the horror of the belly’s innards, the different sensorium, the gastric juice that leaks as a Styx through the black liver.

A non-access to the present with its unpresentable, Hölderlin’s das Unmittelbare is inaccessible to both common people and gods, uttered by the autoimmune poet as the thwarted citation of Heraclitus so that it gets sutured to Pindar.

The chance to save ourselves is as unpresentable and unseemly as the virus of arbitrariness.

The sovereign decides not only regarding the exception, but also about what is normality. Man-made sovereignty. The fusion of endless Kantian judgements, for example, the emergent/the exceptional is the veracious normality. The bio-ontological of man-made lab viruses, self-replicating genes and cellular automata. And of the Natur-made viruses imitating the “anthropology of competitiveness.”

The indirect guilt of neoliberal biopolitics is no longer actual. In the pandemic we are the abandoned of the absent cause, in the absence of cognitive mapping as substitute of class war - both are unactual.

The symbiotic Gaia apparently still does not know what she can do as a Spinozist body in the antidote of the organless body of death.

If philosophers and pathogens are locked inside the correlate, then is not the ambiguous fixism of the Great Outdoors yet another viral concubinage?

We would rather ask ourselves: is there anything like the witness of the absolute visit, an intransitivity as the pathogen of correlationism?

Bio-medicalism produces antibodies which are fusional strategies of pretending to pretend, which pretend to pretend being viruses so that they defer and postpone the Real of the virus, once the viral extinction is impossible, the death of death.

Consciousness is geometrical, the guttural innards are part of astronomic numbers.

Digestion and knowledge are in different mathematical spheres.

What, for those hundred trillion cells in the human body, is their literal dignity?

Primitive and instinctual neurological substrate of the mind vs. uniquely human and symbolically structured nature of the unconscious. Primordial, biologically based death instinct vs. narcissistic wish to occupy the phallic position, the Symbolic or cultural order (Donald L. Carveth).

Will the biopolitical rise to the level of its own artefact?

Does not immunization via contained contagion resemble the appropriation of cultural symbolic forms through Oedipalization?

This logical Oedipality is impossible to clean.

The divinatory theology of the inaccessible enjoyment is in the portional intervalling of surplus enjoyment.

Again, the immediate is inaccessible for both gods and people. Probably today this is going to be related to the unseparated myth of the given. Or to the virginal chance beyond the dice and its prostituting numbers.

Yet in fact a paralogism has been uttered. The interdiction to refer to a self-articulating totality has been transgressed and the first to do that was Parmenides the father, while he was pretending to pretend that he delivers an ontology (Paul Livingston).

All religions are based upon the hallucinatory value of the “the unscathed” (l’indemne), the pure and the untouched, the sacred and the saintly, and respectively the same goes also for the ontologies in a thwarted access to self-articulating totalities.

Not even ontologies, it is even worse - the pre-ontological waiting room as khōra, after the non-predicative schema of neither-nor - what else is this if not the guarantee of immunity?

The same is true for the unconscious as it is emplaced in the pre-ontological as the unrealized of the neither-nor - a struggle for the pole position.

Why not emplace here, i.e., not-here, also the pathogenic, neither sensible nor intelligible, neither alive nor dead, neither being nor non-being, or even becoming, a “something that no dialectic, participatory schema, or analogy would allow one to rearticulate together with any philosopheme whatsoever…” (Derrida, “Khōra”).

Angels are as the deactivated viruses, an idiomatic writing as a radiant glory. A non-negative chance, a principle of the ruins in the thing itself, the non-assigned metaphysical topica of the pathogen as the embodiment of the undead object in a clinical demonology, etc.

God is the unmarked, just as the unpresentable present is unmarked, das Unmittelbare.

Meister Eckhart’s Gelâzenheit is another fetish for the unlimited volume, an absolute immunity and absolute quarantine, a relaxation under the influence of the attractor-God.

A Spinozist attractor under the morphismic vibration. An attractor-arche-trace under the differential vibration.

The nihilism of signs is handcuffed, the nihilism of temporal spacing is compromised, just as the shelf of Borges’ infinite library is anthropomorphically fixed, spaced.

Even Lacan is accused of literalizing the hole that produces the lack, this literal hole is always already semiotized - and is not this valid also for the Void, for the anxiety in front of the Void of the unpresented singularities of the unpresentable biopolitical Empire?

Аn errant and measureless obscurity in which imperial biopower is enveloped, this drifting obscurity of the imperial Dasein - as it turns out, this symbolically threatening presentment is clinically approved.

“Nothing in common, nothing immune, safe and sound, heilig and holy, nothing unscathed in the most autonomous living present without a risk of autoimmunity” (Derrida, Acts of Religion).

“Only to God does inactivity (anapausis) really belong”, writes Philon avec Agamben, “the Sabbath, which means inactivity, belongs to God” and, at the same time, is the object of eschatological expectations (“they shall not enter into my inactivity” [eis ten anapausin emou]).

Still, how miserable this is, anapausis of the divine respite, and for us - the quarantine of pseudo-Sabbath.

Mathematics evades the limiting paradoxes by inventing new mathematics, and the same is true for ontologies - is not this a viral behavior? No one can substitute me in vomiting my own guts. Nor in the ontological neurosis as super-reaction (Nick Land).

Translated from the Bulgarian by Stanimir Panayotov

Zlatomir Zlatanov (1953) is a poet, writer, and critic, one of the mavericks of Bulgarian postmodernism, author of Palinodies (1989), largely considered the first openly postmodernist poetry book in Bulgaria. His novelette Exitus (1982) was adapted for the 1989 movie with the same title directed by Krassimir Kroumov (to this day considered one of the most representative Bulgarian films concerning the perestroika). Zlatanov is most (in)famously known for his poetry book On the Island of the Coprophiles (1997). In the late 1990s and early 2000s he began developing an increasingly theoretical lexis (beginning with Protocols for the Other, 2000) and later engaged with the thought of Lacan and Badiou, publishing novels such as Lacanian Networks (2005) and the series of essays, Alain Badiou, Or, the Persistence of Illogical Worlds (2008).