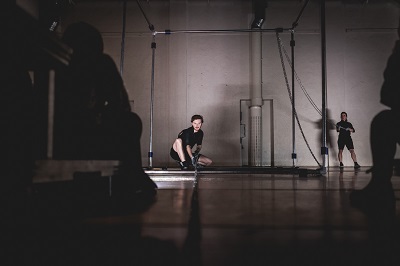 Since the Israeli lockdown began due to COVID-19, the Israeli government has started passing anti-democratic bills in the name of the crisis. In response, the Black Flag movement organized a physical live protest in April 2020 in Tel Aviv, while maintaining social distancing. Organizers carefully measured and marked Rabin Square in central Tel Aviv with assigned spots, in the shape of an X, to safely accommodate as many protesters as possible according to the distancing guidelines. 2,800 spots were marked for protesters, which proved to be insufficient, and resulted in many people standing at the required distance on surrounding streets.

This protest, which had succeeded others that were held mainly online, physically united people in radical ideological and political disaccord. What occurred at the Rabin Square was something unique and unprecedented. As Chairman of the Joint List Ayman Odeh said in his speech during the protest: “It’s not easy for me to stand among some of the speakers here tonight, but we need to see the main point – only through a joint Jewish-Arab struggle can we succeed.” Odeh added, “This crisis presents a huge opportunity for a wide Jewish-Arab front for peace and democracy” (Breiner 2020).

COVID-19 and the Transindividual

2019 saw the emergence of a new virus that was named COVID-19. Many scientists discussed, prior to this emergence, the possibility of a new, highly contagious virus. They all agreed that a COVID-19-like virus would have tremendous and unpredictable ramifications for our highly globalized world. We now say that these scientists were absolutely right. However, what the scientists did not and could not predict was the quality of the encounter between the people of the world and this imperceptible, more-than-human wandering entity. Moreover, equally unpredictable was/is the human behavior regarding this ongoing encounter.

What occurred with the introduction of the virus was that the protesters in Israel endured extra or deeper transformations by accessing the virtual even more. This extra contraction is what made this protest possible. Simondon defines this extra contraction as the transindividual. To partake in the transindividual, he argues, the psychic individual abandons something of her identity - this abandonment is always the result of a contingency, a disorganizing event - and must be contained and limited to personality marks and unique qualities – fundamental to social and collective existence (ibid.). COVID-19 has been such an event. Some people disindividuated by renouncing - consciously and nonconsciously - parts of their identities in furtherance of a deviating becoming, an expansion of the reality of the virtual that made every individual and collective life possible but that which the social always tries to contain and habituate. Nevertheless, the collective is imperative to the transindividual, it cannot be evoked without an encounter, something that a solitary individual can never accomplish. It is in this encounter that a “more-than-individual” and “more-than-collective relation” (Grosz 2017, 197) is produced. With the transindividual, new and subtracted individuals can penetrate and originate something of the reality of the virtual, a new entity or event - in this case, the protest - that has the potential to transform collective and psychic life forever from within. How it will change is impossible to foresee.

Black Flag and the Change of Strategy

Many journalists say the protest was an act against the coalition deal signed between Blue and White leader Benny Gantz and Prime Minister Benjamin Netanyahu. A deal that ended more than a year of political stalemate and deadlocked elections. Since March 2019, the Israeli population was asked to go to the polls three times, in each instance producing a tie between Gantz and Netanyahu. On the third occasion, Gantz, after the introduction of the virus in Israel, made the scandalous move of joining Netanyahu - a Prime Minister Gantz called unsuitable for the position due to many corruption claims - and destroy his own centrist political party. The pair’s deal incorporates an accord that Gantz would take over the position of prime minister in 18 months. Netanyahu however, who will keep the prime minister position in the meantime, induced Gantz to consent to many political requests, one of which was veto power over the appointment of the following state persecutor and attorney general in his many trials for bribery, fraud and breach of trust. Additionally, Netanyahu is allowed to choose half of the committee of designated judges (Sales 2020).

Amid all these political negotiations, Black Flag[1] organized its first protest on March 19 when a convoy of cars drove from all over Israel to Jerusalem for Knesset speaker Yudi Edelstein’s “refusal to set up parliamentary committees and his attempt at thwarting Blue and White efforts to advance the replacement of Netanyahu” (Bassist 2020). The movement quickly transformed into a national phenomenon, one event turned into weekly protests in Tel Aviv and beyond. The culmination, in my opinion, occurred when many thousands of people decided to gather at the Rabin Square on April 16 against, according to some journalists and protestors, Gantz’s coalition plans to join Netanyahu and other “controversial policies advanced by the government to curb the spread of the coronavirus” (ibid). So, what made the protestors assemble? Why this shift in strategy after many “safe” convoy and online protests? Why did people in radical disaccord decide to meet that night? I believe it was mainly out of a desire to create, to feel and perceive the new.

How to apprehend this desire and consequently the protest as an experience? I would postulate that the answer lies partly in Deleuze and Guattari’s concept of affect. Affects, according to Deleuze and Guattari, are not to be represented in language or signification, they take place on a divergent register, an asignifying one, and can only be encountered in experience, as the passage from one intensity to another, and as a reaction, at the level of matter, in or on the body. They are what constitutes life as a whole. In Deleuzo-Guattarian terms, affects are the “molecular” “beneath” the “molar” (Deleuze and Guattari 2013), the molecular understood here as, what Simon O’Sullivan argues, “life and art’s intensive quality, the stuff that goes ‘beneath,’ in fact that always parallels, signification” (O’Sulivan 2006, 43).

Affect is what connects humans to the becoming of the world. It is the matter in and on us reacting, resonating and interacting with the matter of the world. The creative act for Deleuze and Guattari is an “access point,” the gateway to a divergent world of molecular transformation - a different experience. They argue that this is what renders the creative act abstract: the rendering visible of imperceptible forces (Deleuze and Guattari 1994, 181-2).[2] John Rajchman writes about this notion of the abstract as the realm of potentialities prior to figuration. The creator - in this case the protestors - come to experience the world as intense, not as the repetition of the old, but rather “filled with unseen virtuality of other strange possibilities” (Rajchman 1998, 61). This is, I would argue, what occurred prior to the protest at the Rabin Square. The night of the protest was a coming into being of what was previously seen with the help of the transindividual. We must not, however, interpret this “seen” as a clear image but rather as a strange possibility for experiencing the radically new.

That night redefined what a protest is, and what a protest can do. The creators that night generated a different world, a new experience for themselves and the rest of the world. That night people performed otherwise, in a relational milieu stripped of all their self-centredness. The (prior) right-wing Israeli Jew cared for the Palestinian body, and vice versa, not entirely out of self-care, but also out of care for the event, for the relational potential that surpassed them as individuals; for the realm of affect, the possibility for another molecular becoming. This performativity, I believe, did not entirely serve the purpose of a critique or a sense of what a different future might entail but rather it was the presentation of a creative work in progress. It was the making and unfolding of a creative act in close collaboration with an abundance of human and more-than-human entities. COVID-19 did/does not only decrease our capacity to act, it has the ability to also produce joyful encounters, those which increase our capability to act in this world.[3]

The Virtual and the Possible

In his speech, Ayman Odeh brings up an idea for a better possible future world to come. However, while the future is tremendously important as is the critique of the unfolding present, the other-worldliness created and expressed in the protest was, I would argue, world-creating in its very becoming: another world and not merely a springboard for a better, different world far into the distant future.

What was at stake in the protest was not only the setting up of a possible futuristic world that would ultimately require certain conducts for its realization. Realization, in this instance, always already resembles the real, according to Deleuze (Deleuze 2014, 211).[5] The idea of a possible Jewish-Arab front is already an actualization minus its realization. Contrarily, the actualization of the virtual is always a genuinely creative act. This protest actualized invisible universes, affects that prior to their actualization were real but unable to be envisaged or conceived. Consequently, following Deleuze, the process of realization and actualization differ in kind with the former functioning via resemblance (representation) - intellect - and the latter via distribution (difference) - affect. This grants the protest an ethico-political imperative because it implicates a moving beyond the previously familiar and a reordering of the world. Ultimately, the political cannot but also be situated in the new, in the creative act that brings about a genuinely new experience.

[1] Black Flag was initiated by three brothers and a sister who had not been previously involved in any political activity.

[3] For Spinoza, encounters will always have different characters: certain encounters will be fruitful, others not as much. Joyful encounters are of the joy-intensifying type, the ones that increase our capability to act productively in the world (Spinoza 2001).

[4] The new equals the unrecognizable, as Deleuze argues in Difference and Repetition, “the new - in other words, difference - calls forth forces in thought which are not the forces of recognition, today or tomorrow, but the powers of a completely other model, from an unrecognized and unrecognizable terra incognita” (Deleuze 2014, 179).

[5] In Difference and Repetition (1997) Deleuze makes a crucial distinction between the possible and the virtual: “The only danger in all this is that the virtual could be confused with the possible. The possible is opposed to the real; the process undergone by the possible is therefore a ‘realization.’ In contrast, the virtual is not opposed to the real; it possesses a full reality by itself. The process it undergoes is actualization. It would be wrong to see only a verbal dispute here: it is a question of existence itself” (Deleuze 2014, 211).

Anthony Nestel is an artist and theorist based in Amsterdam. In the last few years he has mainly worked within the medium of performance in close collaboration with choreographer Esther Arribas. He is currently enrolled in the Media, Art and Performance program at Utrecht University.