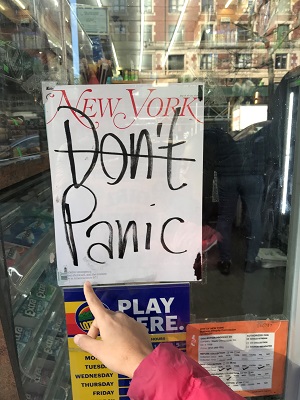 Photo by the author

I don’t know about you, but it has become obvious to me that, its recent rebranding notwithstanding, the name “sapiens” is a misnomer.

Around 1758, Carl Linnaeus coined the phrase “homo sapiens.” He may have tried to register some hesitation. On the same line as “homo sapiens,” and by no more than appositional logic, he inscribed another Latin phrase. “Nosce Te Ipsum,” Linnaeus wrote. Know Thyself.

This old imperative involves a well-known paradox, which reveals the limits of our sapientia, our knowledge and wisdom. The sense that the object to be known - a self, say - is already there and available, already known or knowable, in some fashion. It is known enough, in any case, for one to know that there is more to know. But who really knows? How to know that which did not avail itself to our knowledge? A changing self or an old-new virus, say? At a moment like this, I would not want to channel Donald Rumsfeld (and who remembers him, anyway?) on previously knowns and belated unknowns, on known unknowns and unknown unknowns.[1] But learning - the deceptively simple task of taking a step toward a knowledge of self or other - does mean exposing oneself to an enormous mass of unknowns. To uncertainty and to incompleteness. Or to denial, and to the possibility of failure. Is there, in fact, a self? And is it ours? Can we really know ourselves?

Whether it is knowledge or wisdom, it seems increasingly dubious to consider that we are endowed with it, that we can assuredly rely on our teachers (some of them working very hard these days), or on existing expertises, much less on ourselves as “knowers.” And even if we grant that our designated experts do know something (which they do, of course, if not always enough, or even their own selves), much remains to be learned still with regard to the expertises we need, the different objects we must learn most urgently about. Which experts know enough, and which to listen to?

The physicians and microbiologists, for instance, tell us to shelter at home. Let us forget for a moment that this imperative is meaningless for those who live in crowded conditions and depend on their mobility for sustenance, those “essential workers” (we did learn a new language, did we not?), or those without a choice. Let us assume that everybody in the world stays at home (alright, not everybody, but almost everybody). It seems clear that things will not go well. That the therapy is harming the patient. As a matter of fact, we are already witnessing, feeling, the financial losses, the economic devastation (some of us had learned earlier). And these are significant. Should we then shift from one expert to the next, from medicine to economics? There may or may not be a contradiction, but who would know? And what about the jurists? Won’t we expose ourselves to lawsuits later? Do we know? Whence will wisdom come that would not only tell us what we need to know, but also which task or object of knowledge we must collectively attend to?

I do not mean to suggest that we do not know anything, therefore. Nor that we have not learned much. Like other animals (and some viruses too), we are learning beings, learning animals. We are homo discens.

But we know too little still. And wisdom eludes us.

Still, we are learning, are we not?

We are learning who and what “we” is. Where and when.

We are learning that change can come faster than we otherwise keep telling ourselves.

We are learning that the air can get cleaner fast. Perhaps the water could too.

We are learning a new language.

We are learning to wear a face veil (ostensibly) and do proper ablutions (religiously).

We are learning that “doing something about it” is not always the way. Sometimes one just has to be idle, do nothing or do less, and “shelter in place.” And learn about the self. Or solidarity. Or something.

We are learning that borders cannot really close. Not for viruses, nor for ventilators.

We are learning that there are other ways to prepare or respond to a pandemic.

We are learning that health, and the elderly, should have mattered earlier.

We are learning about comorbidity. Again.

We are learning that there is no such thing as equality.

We are learning (for the nth time) that some lives matter less. More and less. The lives of “essential workers,” the poor and the immigrant, the homeless and those whose dwellings and neighborhoods, ghettoes and favelas, are too crowded for “social distancing.”

We are learning (for the nnth time) that race counts. And counting.

We are learning to be inessential.

We are learning that each of us may be a carrier, an unwitting - unknowing - dangerous individual.[2]

Others are learning too. The corporate suspects.

We are learning knowledge that may not be knowledge - the latest piece of information, say, soon to be discarded as wrong or misguided.

We are learning that our teachers and our experts, our “leaders” too, have much to learn.

We are learning that we should have learned earlier.

We are learning time.

We are learning that learning takes time, that it is a demanding path with no guarantees that knowledge, much less wisdom, or indeed learning, will be found.

We are learning that some of us are unable to learn (schools are closed, or too expensive). Others are unwilling.

We are learning that some of us will never learn.

We are learning failure.

[1] David A. Graham, “Rumsfeld’s Knowns and Unknowns: The Intellectual History of a Quip,” The Atlantic (March 27, 2014), www.theatlantic.com/politics/archive/2014/03/rumsfelds-knowns-and-unknowns-the-intellectual-history-of-a-quip/359719.

Gil Anidjar is Professor in the Departments of Religion and the Department of Middle Eastern, South Asian, and African Studies (MESAAS) at Columbia University.